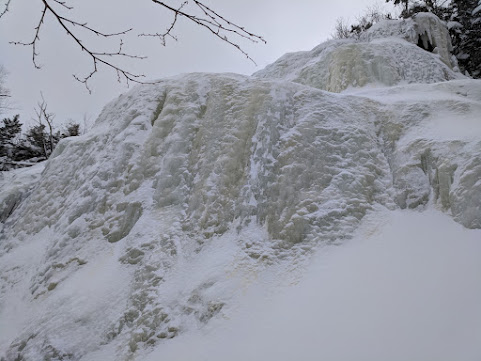 On Saturday March 10, 2018 Don, Toni and I ventured out to Mt. Avalon. With the NEClimbs Ice Report looking rather pessimistic we deiced to go somewhere with no reported ice condition information. I figured the less we knew about the ice the better off we were. So we woke up bright and early, got ourselves some food at Patches and then leisurely waited for Bear Notch Ski and Snowshoe Rentals to open so we could rent ourselves a pair of snowshoes for our little bushwack.

Walking in the woods 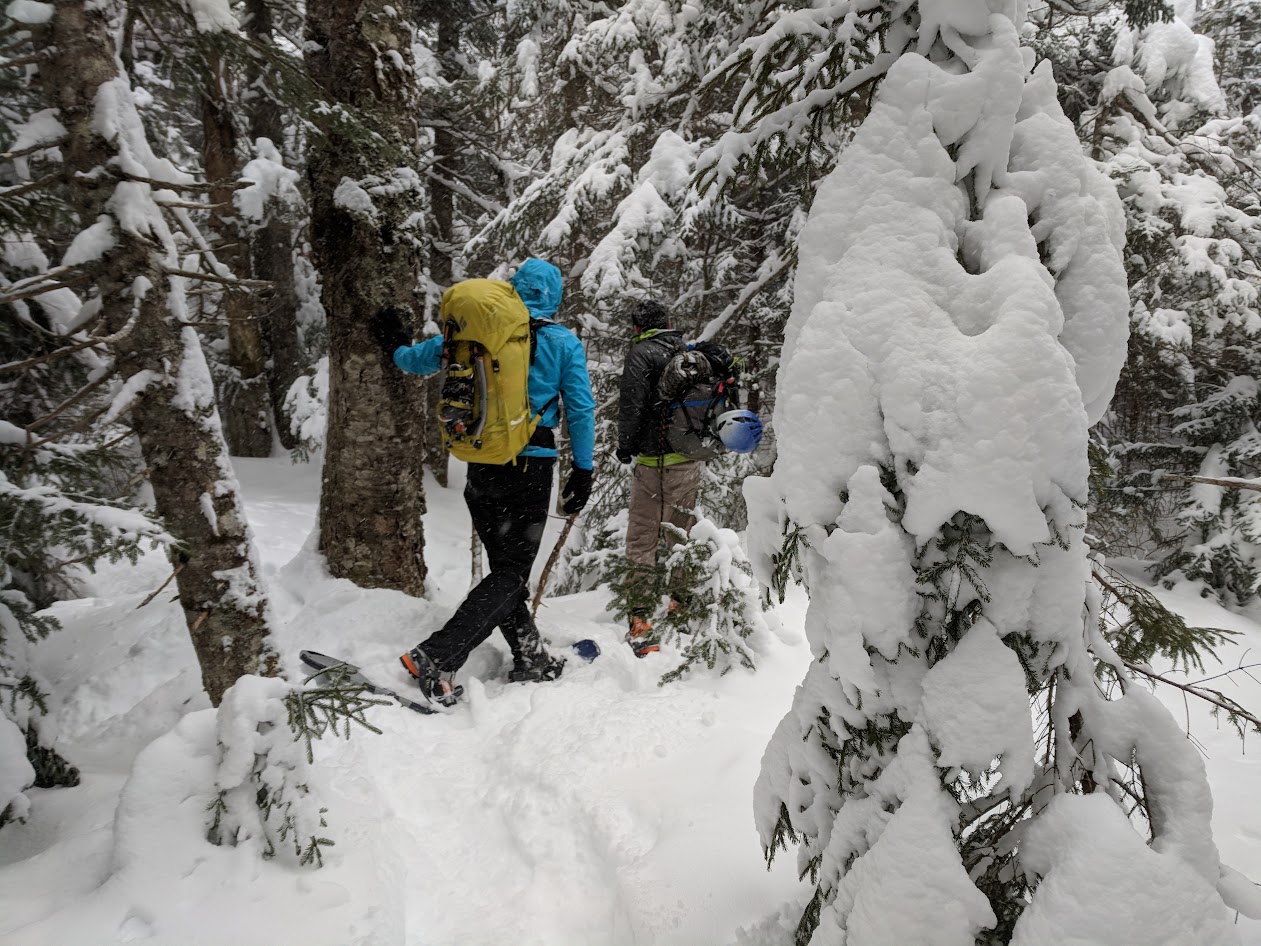 The trail to get out there is not particularly bad for the first 1.3 miles. You follow the Mt. Willard trail for this stretch. When the Mt. Willard trail makes hard left to the summit you make a hard right into the woods, this part of the approach will NOT be packed out (unless you are very lucky), and if it snowed recently snow shoes are recommended.

A map of the approach to Mt. Avalon. The red is our actual path and purple was our intended path.

This was also my first time using caltopo to make a map, and then using Avenza Maps and my phones GPS to get out into the backcountry. As a precaution we also brought a paper map and took a bearing with a compass when we started, periodically we used our GPS to correct that bearing. It ended up working out well for us. We almost overshot the ice, but Toni started to think maybe we were going to high, and after consulting our map we agreed and moved left along the cliff and soon enough we were at the base of Battle of the Bulge. The approach took us about 2 hours starting around 9:10 and reaching the cliff around 11:30. We raced up the Mt. Willard trail rather fast, but navigating through the woods took a while. Toni and Don took turns breaking trail while I kind of stared at my phone trying to make sense of which way we should go.

Don for scale in front of Battle of the Bulge 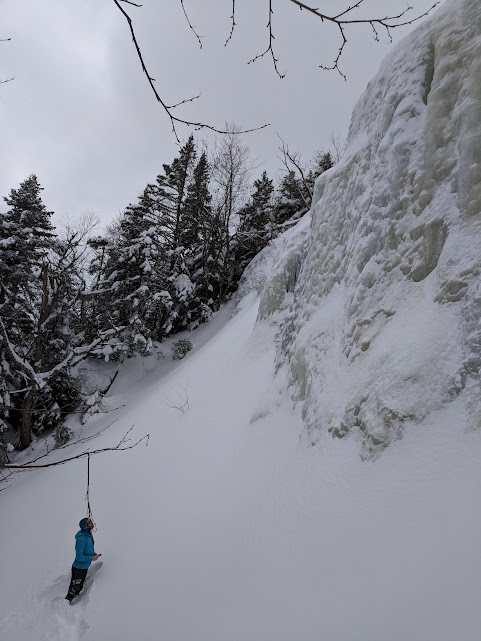 Once we saw ice we started climbing it, Don took the first lead, and the ice was aerated and rotten. It was fun climbing, but had a weird quality to it. While he was climbing I got a few cool pictures.

Don starts up Battle of the Bulge/Mellow Yellow 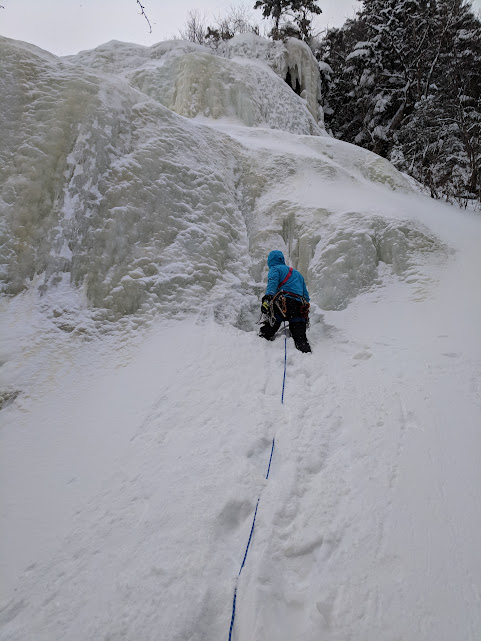 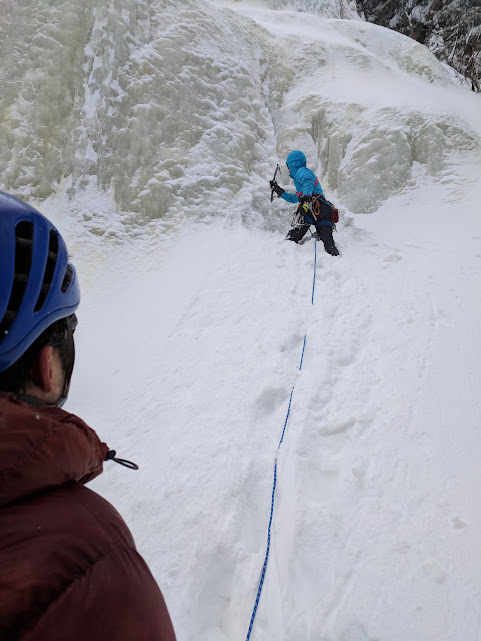 Toni belaying with Mt. Webster in the background 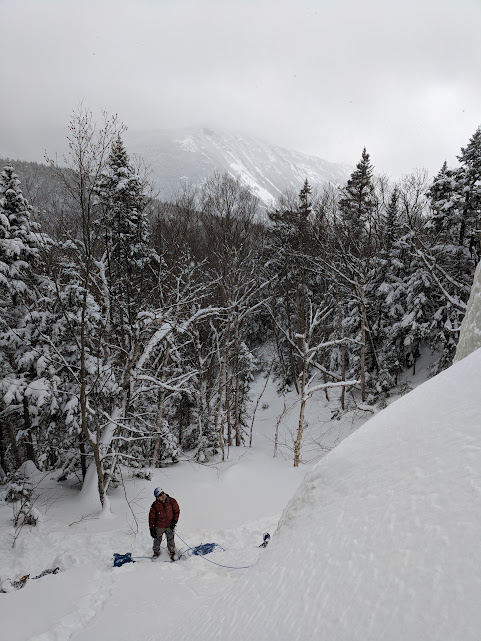 Don wondering if there is actually ice under all that snow. 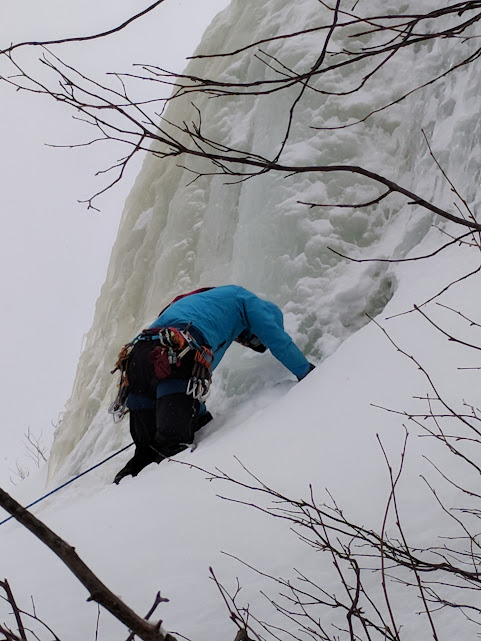 While they were climbing I took the opportunity to hunt along the cliff band. I did not make it all the way out to Peer Pressure, but have a pretty good idea where it is. I did get a nice picture of Tally Ho! though.

A very snow covered Tally Ho! the beginning of the Yellow Wall is on the left. 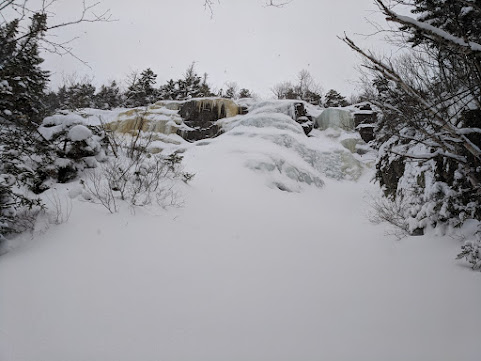 We wrapped up our day by doing Dang’s Gully, a cool looking brown/yellow gully to the right of Battle of the Bulge/Mellow Yellow. I went up first, but found the ice to be too rotten for my tastes and was having trouble getting good stability with my monopoints around the crux bulge. So I handed over the sharp end to Don who admitted it was harder than it looks from the ground (probably just to sooth my crushed ego), and handily finished it up. 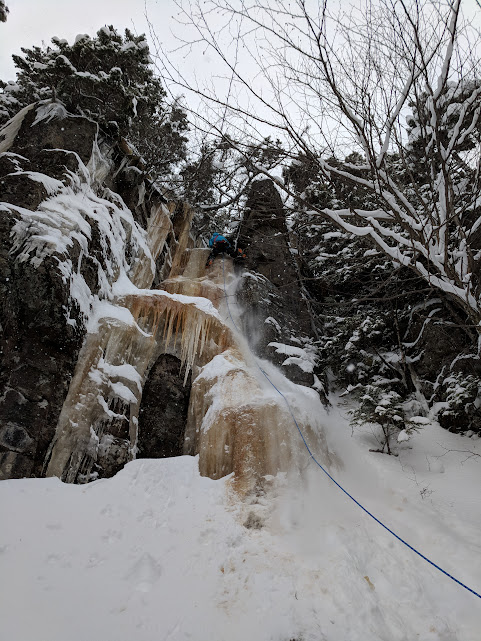 We put our snow shoes back on and hiked out early, we were back at the cars by 4:30 or so, and what took us almost 2.5 hours to get in only took us 40-50 minutes to reverse. Part of it was because we were going down hill, and almost ran down the Willard trail, but also knowing where to go and being able to walk back through our already packed out trail sped us up considerably. We were then off to the Moat to beat the crowds and feel pretty excited that we found the ice on Mt. Avalon. 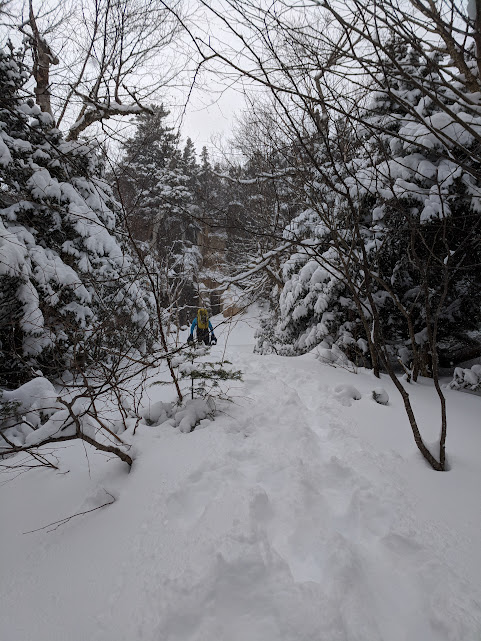