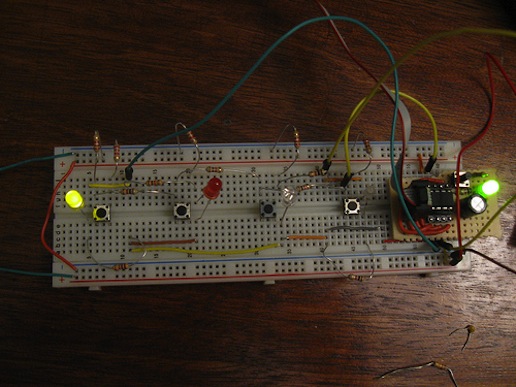 Nomis is a Simon-like memory game for the ATTiny85, which uses the ATTiny85. The game logic in the ATTiny85 was implemented using AVR C and takes up 983 bytes in program memory and 6 bytes in data memory. The implementation size comes in under 1kB, but could most certainly be smaller. The pin usage, however, is very conservative and the games electronics take up a total of 4 of the 6 available pins. The 4 LEDs are controlled on 3 pins using Charlieplexing model (which could easily be extended to 6 LEDs). On the other hand the 4 pushbutton switches are feed into an ADC input through an R2R ladder configuration. I am very happy with the limited pin usage of this project.