The Graveyard Book by Neil Gaiman 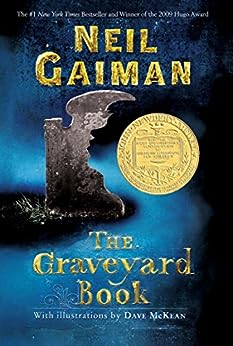 I started listening to The Graveyard Book by Neil Gaiman while I was in JFK airport in NY. I had missed a connecting flight and was alone in the airport for those early morning hours where the bustling of the airport stops. The ambiance of the airport fit the tone of the book. I really enjoyed the story-telling. Part of it was that the Audible full-cast production was very well done and the writing style fits an audiobook. Each chapter is a story in and of itself, and the book follows Nobody, a boy who is being brought up by ghosts in a graveyard. He learns things which are not typical, but through this he is able to overcome the challenges which prevent him from living a normal life. It is a beautiful coming of age story, and touches not just on the heroic, but also some of the ambiguity and evil which is inherent in living a life.